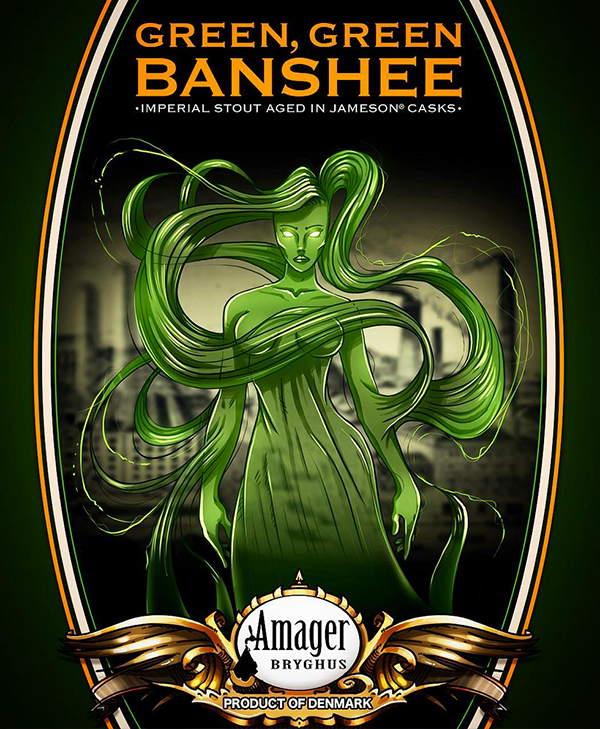 
Usually whiskybrands are very protective about their brands names. But Pernod Ricard approached the danish brewery Amager Bryghus (Amager Brewhouse) and asked if Amager could do some things with a set of Jameson casks.

Amager had a visit of a group from Pernid Ricard, and after tasting some beers and agreement was made. Early 2016 eight casks (both ex-sherry and ex-bourbon).were delivered from Midleton (where Jameson is made today) and they were filled with an imperial stout. A stout is a dark beer and imperial versions of beers is used to describe a beer that is very strong in alcohol and flavour.

The stout has been maturing in these eight casks for the last 4 months and here is the result:


11% ABV
So what's in it for Amager? Amager more or less got known in the big world of craft beer by making collaboration brews with some of the best breweries in the world. Beer entusiasts know that a world class brewer only will make collaboration brews with the best. This is not a collaboration brew, but working together with Jameson is just another step for Amager. And very important, it secured delivery of totally fresh ex-whisky casks to the brewery. The shorter time there is from emptying whisky from a cask to filling it with beer, the better the prior content will affect the beer. The wood is still soaked in whisky and the the longer you wait, the casks will dry out. Casks are expensive and distilleries tends to use casks until they have nothing left to contribute to new spirits anymore. Ex-bourbon casks have only been used once for whisky and then nothing else, while ex-whisky casks had bourbon, sherry and whisky in them more times.Having direct connections to a distillery or bottler that matures whisky could potentially give you access to a lot better casks and not just something they can't use anymore.

What's in it for Jameson? It's a smart move. Craft beer is a big thing. Roughly said, you can say that craft beer is dominated by a younger consumer base, and not as male dominated fanbase as whisky. While whisky today seems to be mainly for old men (like me), the beer scene is having a wider approach. It's a market segment that suits Jameson very well. And Amager is not chosen randomly. There is more than 7000 breweries in Europe. On ratebeers top 100 there is just 18 european breweries, with the remaing being from USA apart from 3 canadian. 3 of these 18 is danish. 2 of these 3 breweries are gypsy breweries, and the last 1, the only top danish brewery that brews in Denmark, that is Amager

So how is the beer?

A thick oily pour with a minimum of head. The nose is sweet and stoutish with a clear presenece of whisky. The fist thing I notice is the abscence of what I consider the biggest occuring off flavour in stouts, which is a slight acitidy or sourness. To me, this absence is an indication if a brewery can make a stout or can't. It is present in most stouts unfortunately. This is a very thick and oily beer. The carbonation is medium-low. When it comes to beer, the difference between ex-whisky casks and ex.bourbon casks is level of vanilla and sweetness infused in the beer. The casks has given this stout a wood flavour, that goes very well with the roasty flavours from the barley. Adding to that there is a nice whisky note in the taste as well. This is a very thick and oiliy beer. with some of the slowest swirl velocity I have ever seen. This is my first time reviewing a beer, but here we go

Oilyness. Very high
Roast flavour: High
Whisky flavour: Medium
Hop: It is masked by other heavier flavours, but it emerges about halfway through the beer and gets dominant on the finish
Sweetness: medium
Drinkability: It goes down easy and is very moreish

This is one of the few beers I have seen with an official whisky brand on the label. on the back of the beer you find the official Jameson and Amager labels side by side

The only other example of an official whisky label on a beer label is the Bowmore beers from Islay Ales. With whisky companies being so afrad of their brand labelings being destroyed by other companies, I never understood why Bowmore went into collaboration with Islay Ales. The result was a big disaster, and the two examples I have tasted were amongst the two worst beers I have tried. I remember a group of 6-8 of us, trying to share a bottle in Lagavulin Hall at last years Feis Ile, and we weren't able to. Apart from these two examples I don't know of any other beers with official distillery names or whisky brands on the labels, please enligthen me if you have encountered any. So far, these two examples have produced one stellar beer and one (acual a range) of disasters. I know that Bowmore have stopped their collaboration with Islay Ales, and I just wonder why it took them so long


PS: In my opinion we got 3-4 more world class breweries located in Denmark